He was perhaps the most famous law enforcement official in America once.

He was the bane of New York's organized crime families and Wall Street crooks. In 1989, he stepped down after six years as U.S. attorney for the Southern District of New York

They called him America's mayor.

Queen Elizabeth II named him a Knight Commander of the Most Excellent Order of the British Empire for supporting bereaved British families in New York.

The man I'm talking about is Rudy Giuliani, a washed-up lawyer in the 21st century with no moral direction. A drunkard who hitched his destiny to the most corrupt president America has ever seen. 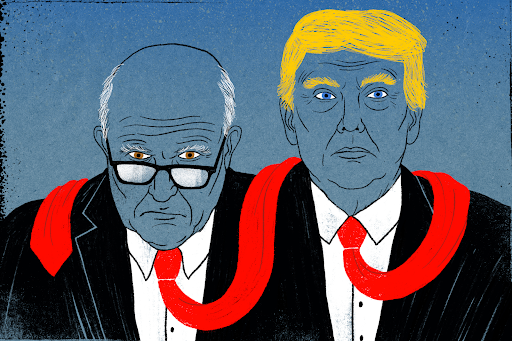 Giuliani and his allies coordinated the nuts and bolts of a plan to overthrow President Biden's victory.

The scheme involved using fake electors in seven swing states to stop the counting of electoral votes by Vice President Pence on Jan. 6. The real electors were to be thrown out.

It was part of a larger plot that involved churning out reams of misinformation and outright lies about the election being stolen.

His efforts to throw out election results, coupled with right-wing propaganda campaigns like "Stop the Steal" exposed Giuliani for what he's been reduced to ...a stinking traitor.

You have to wonder what happened to him? How he could have gone so wrong? The answer is, of course, he hooked up with Donald Trump.