(Today I have two Op Ed articles so impressive I'm giving up my usual space to share them.)

The first piece was written by Lucian K. Truscott IV, and was published on June 19th, 2021 in Salon.

Donald Trump and the new Lost Cause

Lies are a denomination of power. The bigger the lie, the more power it represents. Right now in this country, we are being treated daily to the Big Lie that Donald Trump was the true winner of the presidential election of 2020, and the only reason he's not in the White House right now is because the election was stolen from him.

You may have noticed that the people pushing the Big Lie today are very good at it.

This is because many of them have been pushing an even bigger Big Lie for most of their lives: the lie of the Lost Cause, that the Civil War wasn't really fought over the disgraceful secession of the Southern states and slavery, it was instead a noble cause fought for the "honor" of the South, and that slavery itself wasn't bad or immoral, because enslaved people were happy workers living much better lives than they would have lived where they came from in Africa.

The Lost Cause was — or still is, because it lives today across a broad swath of America — the foundational ethos of racism and was used to perpetuate the racial crimes of the Jim Crow era, when Black Americans in the South were stripped of the right to vote and segregated from whites and subjected to the pernicious political and social discriminatory practices of white supremacy. (Read the rest here) 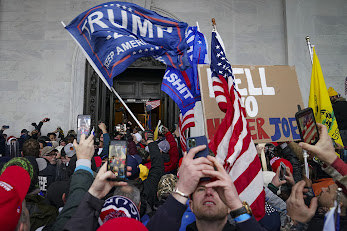 The Simple Remedy for Jan. 6 Trutherism

Just because Arizona Republican Rep. Paul Gosar voted against establishing a commission to investigate the Jan. 6 riot at the Capitol doesn’t mean he’s not ready to use the power of his office to stage an inquiry into the topic by other means.

This week, Gosar, a Donald Trump ally, all but donned a Sherlockian deerstalker hat and wrapped himself in a houndstooth cape in his pursuit of Jan. 6 truth as he cross-examined FBI Director Christopher Wray during a House Oversight Committee hearing.

Gosar claimed that protester Ashli Babbitt had been “executed” by a policeman who had been “lying in wait” for her and demanded to know why her killer had not been named. Did Wray know Babbitt was unarmed? Would Wray approve the release of all surveillance recordings from the Capitol?

The release of all surveillance recordings of the suspected pipe bomber, not just clips? Wray backpedaled—the Babbitt killing wasn’t his case, nor did he control the Capitol tapes, and as for the pipe bomber, he offered that release only a clip was consistent with protecting the integrity of the investigation.

But Gosar wasn’t really looking for answers as much as he was attempting to portray a governmental cover-up of Jan. 6. (Read the rest here)

I'll be back Monday with my usual posts. Enjoy and be safe.