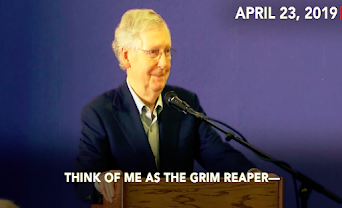 Senate Minority Leader Mitch McConnell/aka The Grim Reaper, is at it again.

In a nation governed by the First Amendment, his threats are meaningless.

After Major League Baseball changed the location of the All Star game this year from Atlanta to Denver because of new voter restriction laws in Georgia, McConnell lashed out and warned the companies they're going to suffer severe consequences for their actions.

Encouraged by McConnell's threats several Republican lawmakers threatened to retaliate against MLB by stripping it of an exemption from federal anti-trust laws.

Similarly, after Delta Air Lines spoke out against the same anti-voting law, Georgia's GOP-controlled House voted to strip away a sales tax exception for jet fuel that primarily benefits Delta.

The bill did not pass.

In the first place it's weird hearing McConnell bad mouth corporations when he depends so heavily on their political contributions.

He's spent his career coddling corporations over the rights of average American's.

Here's the thing: the Constitution forbids this sort of behavior by lawmakers.

To be clear, it is unconstitutional for the government to retaliate against anyone for expressing a political view that members of the government doesn't share.

McConnel, and by extension the Republican Party, are playing with fire when it comes to suppressing free speech in America.