Trump Unleashed: Who Needs a Chief-Of-Staff? 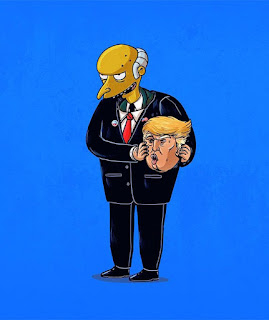 Fair warning...Donny is looking at getting rid of his chief babysitter, John Kelley, so he can go totally rogue!

Kelly's influence with The Donald has been waning lately.

Witness the fact that just about anyone can come into the Oval Office and chat it up with our Liar-In-Chief now.

When Kelley was first appointed he stopped that revolving door and tried to tighten up the West Wing. His efforts have proved useless.

Someone floated the idea to Trump that he didn't need a chief of staff. His little brain has been working on that thought since.

Since Hope Hicks left, Trump has indicated Kellanne Conway would take her placed in the interim. Trump likes her "alternate realities," as they apply to him.

The bottom line; Trump doesn't like being told anything. Especially facts, when they conflict with his rhetoric.

You think the man-child in the Oval Office has been outrageous so far?

Wait until Donny shakes off the last of his restraints, gets rid of Kelly, and appoints the head of his fan club to take his place!

Trump unleashed is a terrifying thought.