Trump Laments, 'I Could Have Been A Peace Prize Recepient' 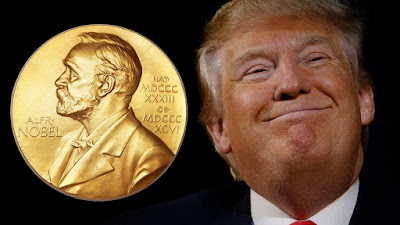 The remaining White House staffers (after the latest purge) are saying Trump is broken-hearted that his nomination for the Nobel Peace Prize was invalidated yesterday.

This year's committee in Norway announced that a forged nomination had been received for Donald Trump. Police in Oslo were contacted, and are currently investigating the case.

Does this sound vaguely familiar? Who would do such a thing?

Anyone with knowledge of Donny's past adventures, and his ego-driven need to be in the spotlight, may recall when he use to call up newspapers and pretend to be his own publicist.

It became a joke in newsrooms when one reporter figured out it was actually Donny calling to sing his own praises! Lol!

Shameless promotion. All the great con men have that trait. No doubt Trump needed some good news. As usual, the White House is in chaos, and Trump's enemies are closing in on him.


Trump aimed too high for a diversion to the negative narratives yapping at his heels like rabid dogs.

He thought he could fool the committee...like he's managed to do with millions of people who believe he's looking out for America's interests.

He also better hope the Oslo police don't have enough resources to trace him down!