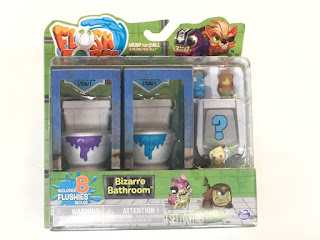 I'm curious to see what will happen to Louis Perez of Placentia, California, this week.

He was cited for being drunk while riding a horse on the 91 Freeway yesterday.

The good news was the horse wasn't cited, or impounded, and was allowed to go back to his stable while his master languished in jail.

Did you happen to hear about some of the latest hot toys in America? Bathroom humor currently reigns. That's right. Toy makers are counting on kids who want to play with #2!

One product, Flush Force comes with plastic toilets big enough to fit a whole line of poop monsters (with names).

Then there's Sticky The Poo, a delightful slime-like product that looks like crap and sticks to walls like the real thing when you throw it.

Does anyone remember the Garbage Pail Kids cards? How gross they were?

The 21st century version is Flush Frenzy, where players flush toilets and watch them explode with disgusting results.

The GOP response to the Parkland shootings qualifies as both disgusting and loathsome. Right-wingers have gone after the teenagers for daring to speak out, calling them "crisis actors."

Have you noticed that Sarah Sanders has only conducted one White House Press briefing in the last ten days? There's been a couple of appearances from White House stooges taking limited questions. But Sarah has been MIA.

Did her conscience finally get the best of her? Is she done lying for Trump? Did a vision from God give her fair warning about going to the OTHER PLACE where most Republicans go?