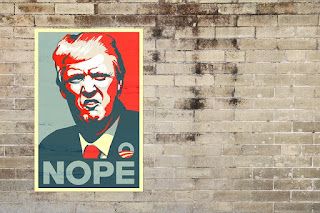 Our Moron-In-Charge has been acting like a troll again on Twitter, threatening that this is the "last chance" for DACA and Immigration reform, if he doesn't get his full agenda.

On the chopping block, so-called entitlement programs like food stamps for the poor, to offset state infrastructure costs.

Under Trump's proposal, states and local governments are responsible for coming up with the money to carry out their own infrastructure needs.

And the way to do that - according to Trump's latest scam - is to dismantle social safety nets across the country by making the states do what the federal government couldn't do.

Giving up domestic programs for the poor in exchange for some political agenda. It sets well in Trump's putrid playbook, and the GOP have been trying to do just that for years.

Trump also made sure to include a ridiculous waste of money ($25 billion) to build his "wall," or there would be no deal.

He tweeted a thinly-veiled threat by noting March 5th is coming up (a deadline he imposed on the DACA program) and there won't be another chance to help the Dreamers if he doesn't get his way.

As usual Trump has it wrong. A recent court ruling has rendered that threat meaningless by erasing Trump's timeline.

Threats. Lies. Diversions. This is Trump's management style and Republican lawmakers are enabling him.

But, there will be a price to pay at the voting booths this fall when Republicans have to face an accounting for their treatment of the Constitution, laws of this land, and slavish support of Trump.

I wonder why Trump isn't talking about Melania's parents who are now living in the USA?

We'll never know because the White House has refused to talk about it. Like so many other issues.