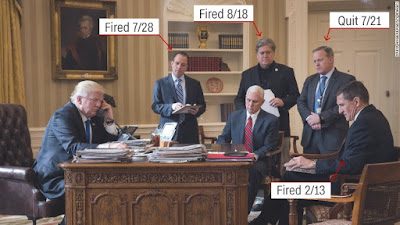 Good Day World!
It has to be the hardest job in Washington.
Standing up for Trump has been a challenge for all the public relations minions in the White House since he was sworn into office.

The PR puppets have come and gone, cast aside when they no longer could effectively hide all of Trump's lies. Sarah Huckabee Sanders is the chief "shit-eater" in the West Wing.
Her ability to stand up to the press and defend her man is impressive.
We must not forget the busy puppets in the background covering for their foul-mouthed master. The most recent cover-up:
The public is told...
Trump got a clean bill of health after a three-hour examination.
So why was the statement signed "Dr. Ronnie Jackson?"
What's odd about that you ask?
Well, unless the White House doctor suddenly forgot to spell his own name - Ronny Jackson - correctly, something stinks in the White House.
It should also be noted that most medical doctors sign their name, followed by their degree (for example Ronny Jackson, MD, FAAEM).
Not "Dr." so, and so.
The question here is why did his minions fake the doctor's statement? Do you suppose there's something they don't want us to know?
Hmmmmmm...
One last cover-up:

When Huckabee was asked to comment on that lurid report she disdainfully told the press "These are old, recycled reports, which were published and strongly denied prior to the election."

Someone ought to tell Huckabee denial doesn't mean the story didn't happen. It did.

A reminder; Trump is married to Melania, and was married to her when he cheated with "Stormy Daniels." For the record, her real name is Stephanie Clifford.