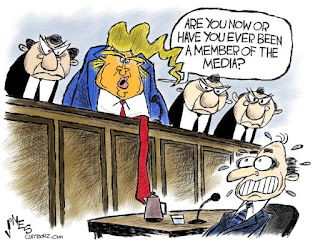 Trump plans on giving "Fake News Awards" on Twitter Wednesday, that will feature "the most corrupt & biased of the Mainstream Media."

No doubt it will be meat for the trolls that still support him. But the backlash is going to be fierce.

On the same day, Sen. Jeff Flake is planning on giving a speech on the Senate floor about the danger of trying to discredit the free press.

In it, he will slam President Donald Trump's attacks on the press by comparing the president's use of the term "enemy of the people" to describe the media, to Soviet dictator Josef Stalin's use of it.

"When a figure in power reflexively calls any press that doesn't suit him ‘fake news,’ it is that person who should be the figure of suspicion, not the press.

"We have a balance of power, separated powers here. We shouldn't all be afraid to criticize the president when we think he's wrong."

Flake will talk about the "unprecedented" and "unwarranted" attacks against the mainstream media.

According to the excerpts, he will point out that, "2017 was a year which saw the truth — objective, empirical, evidence-based truth — more battered and abused than any other time in the history of our country, at the hands of the most powerful figure in our government."

Flake plans on telling Trump that, "... it's a testament to the condition of our democracy that you use words infamously spoken by Josef Stalin to describe your enemies.

Flake will point out that, "It bears noting that so fraught with malice was the phrase 'enemy of the people,' that even (later Soviet leader) Nikita Khrushchev forbad its use, telling the Soviet Communist Party that the phrase had been introduced by Stalin to for the purpose of 'annihilating such individuals' who disagreed with the supreme leader."

This powerful speech is going to make a lot of GOP senators uncomfortable.

The question is how will congressional leaders respond to Flake's charge that they turned a blind eye to Trump's behavior and the "demagoguery" stewing within their own party?