All in the Family: Eric Trump's Foundation Under Investigation For Funneling Money To Dad's Foundation 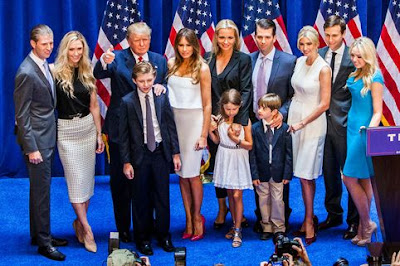 "The program you are about to see is All in the Family. It seeks to throw a humorous spotlight on our frailties, prejudices, and concerns. By making them a source of laughter, we hope to show—in a mature fashion—just how absurd they are.’’ - disclaimer that CBS ran prior to the very first episode of All in the Family.

Trump's mob buddies and the Russians must be so proud. Our story today is the 21st Century version of the iconic TV show, "All In The Family."

The New York attorney general is looking into the Eric Trump Foundation after reports emerged that the foundation may have funneled money to the Donald J. Trump Foundation.
Eric Schneiderman's office, which had previously been investigating the Donald J. Trump Foundation, is now looking into the Eric Trump Foundation for potential violation of state laws, a spokesman told Forbes.
It was reported earlier this week that President Trump’s charity foundation funneled $100,000 in donations meant for St. Jude’s Children’s Research Hospital into revenue for the Trump Organization by using his son’s charity.
Additionally, more than $500,000 over 10 years was then re-donated to other charities, including charities connected to members of the Trump family.
At least four of those charities also held charity golf tournaments at Trump golf courses, according to the report.
Eric tried to dissolve his charitable organization last December, but Schneiderman stopped that attempt, saying it was under criminal investigation and it's status remains with him in charge.
Then there's Ivanka's Chinese sweatshop's that make her crap, and the violations of basic human rights in those factories. Just following Daddy's footsteps abroad.
I'm not even going to go into Kushner's crimes. As Donny's son-in-law, he's been elevated to a position in government where he can exploit his and Trump's brand with impudence.
How does this American crime family get away with so much corruption?
It's actually because of a toxic brew of circumstances.
Millions of dollars, crime connections, connections with Russia, connections in the media world, and a small fearful following willing to let Donny get away with murder have brought us to this place.
The story isn't over yet, however. This investigation on Eric is only one of many being looked into against members of the Trump family.
Stay tuned for the latest "All In The Trump Family" when Trump gets tried for obstruction of justice.
Time for me to walk on down the road...
at June 18, 2017