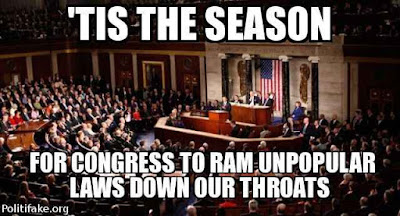 The GOP's first attempt at covering their own corrupt asses by doing away with an independent ethics office in Congress failed.

"The move to effectively kill the Office of Congressional Ethics was not made public until late Monday, when Representative Robert W. Goodlatte, Republican of Virginia and chairman of the House Judiciary Committee, announced that the House Republican Conference had approved the change. There was no advance notice or debate on the measure." (New York Times)
Just hours after the first reports of the Republicans sleazy attempt to cover their corrupt activities was revealed a storm of bipartisan criticism stopped them in their tracks.

House Republicans met yesterday in a secret session and voted to do away with the ethics office. They did this despite Speaker Paul Ryan's objections.

Trump even tweeted it was a waste of time and to move on.

It was an embarrassing turnabout on the first day of business for the new Congress. Their first attempt to pass a bill failed.

The hoped for show of force never materialized.

How united is the Republican party? Apparently, there's contesting agendas.

It's kinda like listening to Dueling Banjo's  in the movie Deliverance, except in the halls of Congress instead of some hillbillies porch.

This assault by wealthy radical ideologues is only a sign of things to come from our new Congress. Unless of course, Trump becomes an obstacle while pursuing his own agenda.