An Intriguing Alternative To Trump and Clinton 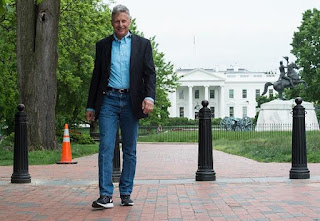 Are you like me when it comes to being totally disgusted with Donald Trump, or Hillary Clinton, as our next president?

Thinking of leaving the country and starting over somewhere else? Canada and Finland are already encouraging disgruntled Americans to move to their countries.

Well, I'm going to offer up an alternative that may surprise you at first: The Libertarian Party, with Gary Johnson (senator from New Mexico) as their presidential candidate.

Every four years a third-party scenario surfaces like a submarine and quickly sinks into obscurity. But this year is different.

For starters there's never been a presidential election featuring two of the most unpopular candidates for president in American history.

According to political pundits the only party with a chance to be a factor is the Libertarian Party. That's partly because they're the only ones whose candidate is likely to make ballot in all 50 states.

Get this; In three recent national surveys, Johnson has cracked double-digits in a hypothetical match-up against Trump and Clinton.

Nicholas Sarwark, chair for the Libertarian National Committee, feels that the combination of polling and pedigree is the long-promised libertarian moment.

The point is, for the first time ever, a third party may stand a chance on pulling off the greatest presidential upset in history.

Johnson's entire strategy in 2016 hinges on winning the media attention that prompts inclusion in surveys, then doing well enough in surveys to get more attention. “We’re spot on in terms of message,” he says, “but it’s a message that’s not being heard.”

His magic number is 15%: the threshold at which a candidate automatically wins a spot on the presidential debate stage.

Think about it. If your conscience can't bear voting for the Donald or Hillary, Johnson could be the ticket. I don't look at it as a wasted vote (or protest vote), but as a vote that may make history.

In this election there are no rules, no traditions, or accurate predictions. Voters are angry enough to seek alternatives to the dreaded-two.

2016 Finally Has a Contested Concention, Thanks To the Libertarians