How to Cultivate a Political Cult of Paranoia 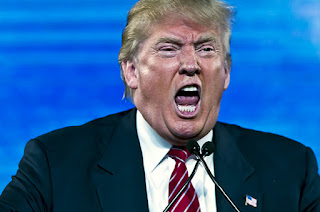 Good Day World!
Donald Trump is a demagogue with money who can mine fear, white identity politics and right-wing populism where spoils and rewards are given to good “real Americans” and the Other is, by definition, punished and excluded.

He's inspiring a gathering cult status among a fearful segment of society who are seeking deliverence from all of their woes.
The Boston Globe explores the concept:Recently, a few political scientists have begun to discover a human tendency deeply discouraging to anyone with faith in the power of information.It’s this:

Facts don’t necessarily have the power to change our minds. In fact, quite the opposite.In a series of studies in 2005 and 2006, researchers at the University of Michigan found that when misinformed people, particularly political partisans, were exposed to corrected facts in news stories, they rarely changed their minds.

In fact, they often became even more strongly set in their beliefs. Facts, they found, were not curing misinformation.Like an underpowered antibiotic, facts could actually make misinformation even stronger… “The general idea is that it’s absolutely threatening to admit you’re wrong,” says political scientist Brendan Nyhan, the lead researcher on the Michigan study.The phenomenon — known as “backfire” — is “a natural defense mechanism to avoid that cognitive dissonance.”

Trump has become a hero for the angry and resentful white “silent majority” who feel that they are somehow being marginalized in “their” country and that “the blacks,” immigrants, Muslims and terrorists are out to get them."

He is a carnival barker, proto-fascist reality TV show host turned Republican 2016 presidential primary leader. And he appeals to the low information Republican base.

This is how low politics have sunk.

A cult leader, carnival barker, and proto-fascist reality TV show host turned Republican 2016 presidential primary leader is being slavishly followed by a money-hungry media that records every hateful thing he says with glee.

Will sanity win out in the end and send Trump packing in the Republican primary? I guess we'll find out next February.