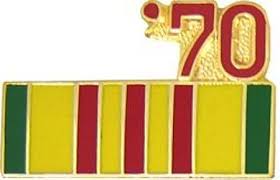 Forty-four years ago this month, I was a combat engineer serving in the Republic of Vietnam.

One year earlier, I was a high school student without a care in the world and eager to graduate so that I could get on with life. Be my own boss. You remember what that was like, don’t you?

My squad’s mission was to sweep for mines on a two-lane dirt road laughingly referred to as Highway 22. We would get up at first light and haul our heavy mine-detection equipment out and take a stroll down that 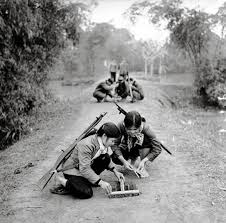 reddish dirt road until we finished, usually at noon.

The VC, who watched our every move from hidey holes, enjoyed putting “Bouncing Betty’s” beneath piles of buffalo shit as they knew the odor offended our Western sensibilities. The hoped we’d pass over the putrid piles rather than bother disturbing them. I never saw the trick work, but heard it did somewhere else from guys in other units.

I can tell you that it was no fun probing for live bombs with a bayonet in a stinky mess. I got use to it however, as I got use to everything in that alien world somewhere in the Central Highlands that spring. How I managed remains a mystery to me today.

Army units were assigned to provide us security and walked along both sides of the road bristling with weapons as we did our job swinging those heavy bulky mine detectors. We always had close ground-to-air-support. We could call in “Puff” the Magic Dragon, Spooky, Golf Ball, or Spectre, which were a bunch of assorted gunships made from AC-47s, C-123s, and C-130s.

Our security radioman could call those death-dealers in for a strike in a heartbeat. Charlie knew this and made it a habit not to wander around during the day. He just burrowed down into the ground and waited for darkness. Hoping that the mines he set during the night would kill some invaders during the day. Sometimes I imagined the enemy’s eyes following me. Patiently watching. Hoping to see me become a causality.

It was a feeling we all had to get use to. We were on constant alert for the many signs that could mean life or death. I found an old French anti-tank mine one day. Took off my earphones and handed my mine detector to my sergeant. I found it and that meant it was mine.

The earth stopped as I carefully probed the spot and slowly traced around the perimeter of the pressure plate. Time was meaningless. Sweat poured off my brow as I strained to recognize what kind of mine I’d uncovered.

I recognized it even as the sergeant said “French make.” That meant it would take at least 500 pounds on the pressure plate to set it off. Excellent for mangling vehicles like American trucks. Once I disabled it I sat down and drank some water from my canteen. I felt like throwing up, but the sensation passed.

Highway 22 overlooked the Song Ba River. To be more accurate, the Ba River as Song means river in Vietnamese. We called it the Song Ba River because that’s what someone wrote down on the maps we used. Maybe that someone liked the sound of “Song” and modified the real local name as Americans did so often during the war. Who cares right?

We had allies out in the jungle too. We were staying in the An Khe area along the West bank where some Montagnards lived. They hated the NVA and the VC, so we became allies. The tribe that we had the most contact with was the Jarair. They were tough little nuts who were fierce fighters and who considered the Vietnamese their enemy from ancient times.

The concoction wasn’t bad at all. Kind of a minty tasting. Much better than the fish head stew I once had in a Montagnard village. While we’re on the subject of local cuisine, I would be remiss if I didn’t mention the Vietnamese Centipede, an orange-legged terror that runs from four inches to eight inches long and has an attitude.

A nearby South Korean unit, we called them ROKS, liked to eat those centipedes. They put them in with their foul-smelling kim che (which already smelled bad enough to gag a maggot). They also ate monkey brains, but I’m not going any further with this.

There was a certain lizard there, about three feet long, that also figured into the local cuisine. I don’t know what it’s real name was, but we called them “Fuck You” lizards. They hung around trees and in the night you could hear them go: “Tik, tik, tik, phuk yu!” They really sounded like someone saying fuck you. If you listened long enough.

We’d tell new guys that it was Charlie out there taunting us, and that got their attention. Saw a Fuck You lizard with a flashlight one night. It looked like a miniature dinosaur and hissed at me! The next day I saw that lizard’s double draped across the back of a young Montagnard boy. He may have been Vietnamese. It’s hard to remember some details. It’s limp body spanned his shoulders and he smiled when I pointed at it. “Numba one chop chop” he said.

One night I got drunk drinking Tiger Beer with some buddies and somehow ended up walking towards the Song Ba River. Heck I don’t know why I did. Maybe to relieve myself. I was drunk. I don’t think I was going there for a swim. I clearly remember a young boy coming out of nowhere. He stopped me from getting any closer to the river by pulling on my arm urgently.

I tried to shake him off and fell down on the muddy ground. That was the last thing I recalled when I woke up the next morning with a splitting headache still on the ground. It was early but the sun was rising when a couple of my buddies came looking for me. After giving me a ration for being outside the camp perimeter I told them about the kid.

“One of them, Crow, shook his head in wonder and pointed out to the river. “If you would have gone any further down that bank you would have slide right into rolls of razor sharp barbwire just beneath the waters edge!”

There was nothing I could say that would explain that feeling of having dodged danger like that. I might have drown if I got tangled up in it while drunk. I didn’t because some nameless little boy took pity on one stupid grunt that night. It was one of the strangest things to happen to me in my time in country.

This incident happened during the last week of April 1970. We got orders the same week that we were going to Cambodia! But that’s another story that may, or may not, be told another day.

I hope this essay helps you understand what it was like 44 years ago for a 19-year-old boy who had to become a man fast in a foreign land. It helps me to share this part of my history and hopefully help people understand war is hell.

For some soldiers like me with PTSD, the war never ended. I live with tortured memories that still come unbidden. Yet, I manage to lead a somewhat normal life (what’s that anyway?) and I don’t fight my battles every day. Most of the time I’m diverted by my daily routines.

It’s the nights that sometimes get really bad, when the nightmares come in terrifying clarity. But medications have lessened their terrors, and I only seem to have trouble certain times of the year…like now. Counselors call it an “anniversary date” and attribute it to extremely bad times in a person‘s life.

I’m not sure about that. If it were the case, then why not the whole year? At least that’s the way it seems to me. I guess it really doesn’t matter what anyone calls it; this isn’t my best time of the year and that usually extends through June.

Thank you for reading this. It helps to share.
Time for me to walk on down the road…

Posted by ImBlogCrazy at 6:29 AM