Cliven Bundy: Racist, Hypocrite & Liar Gets His 15 Minutes of Fame 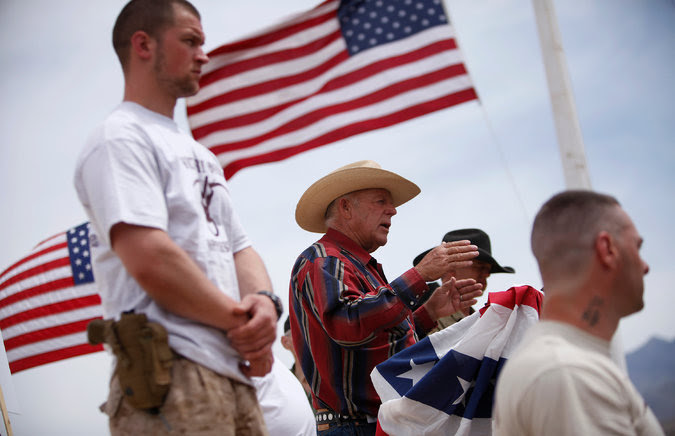 Today we’ll look at a real racist and hypocrite.

His name is Cliven Bundy. That’s him wearing a broad-brimmed white cowboy hat in the photo.

He’s seen here recounting the success of “we the people” - gesturing to his 50 supporters, some armed with handguns and rifles, standing in a semicircle before him - at chasing away Bureau of Land Management rangers who, acting on a court order, tried to confiscate 500 cattle owned by Mr. Bundy, who has been illegally grazing his herd on public land since 1993. 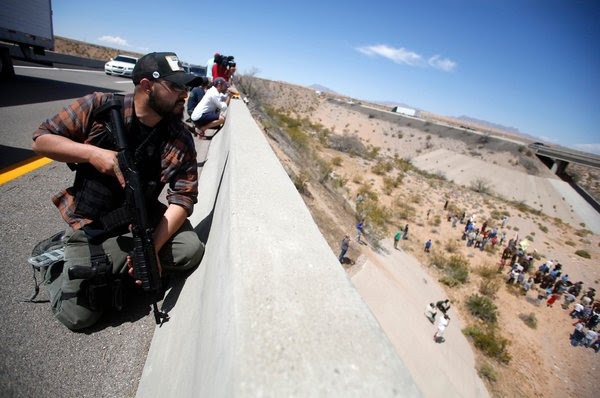 “And because they were basically on government subsidy, so now what do they do?” he asked. “They abort their young children, they put their young men in jail, because they never learned how to pick cotton. And I’ve often wondered, are they better off as slaves, picking cotton and having a family life and doing things, or are they better off under government subsidy? They didn’t get no more freedom. They got less freedom.”

His cause has won support from Senator Rand Paul, the libertarian Republican from Kentucky who is likely to run for president. Senator Dean Heller, a Nevada Republican, referred to Mr. Bundy’s supporters as “patriots.”

But the damage was done. All those politicians who jumped on Bundy’s bandwagon had to back off because the guy is a wackaloon. He doesn’t “recognize” the United States of America, yet he flies an American flag. That’s a hypocrite. And a stupid one at that!

But he didn’t lose the little group of militiamen spoiling for a fight. Some had White Power insignias tattooed on their necks (photo above). They’re still hanging around hoping for a chance at open anarchy.

If Cliven Bundy has his way there will be another confrontation – maybe then he’ll get the shoot-out he wants.

It has been widely reported that Cliven Bundy’s family claims to have ranched in the Bunkerville area since the 1870s even though a federal judge held a different view of Bundy’s history.

Contrast that with the 1998 opinion from U.S. District Judge Johnnie Rawlinson in a case where it was determined Bundy wouldn’t be allowed to use federal land for his cattle because of failure to pay grazing fees to the Bureau of Land Management. Rawlinson wrote that it wasn’t until roughly 1954 that “Bundy or his father or both have grazed livestock on public lands owned by the United States and administered by the BLM.”