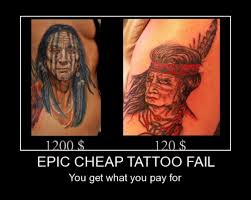 Nearly every member of my family has a ‘tat’ somewhere on their bodies. But all tattoos are not created equally.

By that I mean some tattoos are simply awful, the result of shoddy workmanship or getting one at an early age – like a picture of Ozzy Ozbourne eating a live bird on their chest.

Still other tattoos happen when a person is drunk, or drugged, when they get one on the spur of the moment (which they usually regret).

There’s hope however for the tatted masses who want to come clean and reclaim their flesh. Check out this article:

“Life doesn’t offer a lot of do-overs; the choice you made is often the choice you’re stuck with. But a terrible tattoo — that’s something we can work with. More than a third of younger Americans now have at least one tattoo, and a lot of them are regrettable, apparently.

According to the latest figures from the American Society for

Aesthetic Plastic Surgery, 45,224 tattoo removal procedures were done in 2013, up from 40,801 in 2011. That means that, for many estheticians and medi-spas, tattoo removal accounts for a big chunk of their business.

There are two main types of laser, Q-switch and PicoSure. PicoSure is a newer, faster technology, zapping away a fist-sized tattoo in about five treatments, compared to 10 or 20 treatments in the past.

It can cost up to $1,000 per treatment for larger tattoos, like something taking up most of the back. For smaller tattoos — like, smaller than a business card — it’s about $200 per treatment. Full Story here