Ragnarok: The Viking Apocalypse Is Almost Upon Us 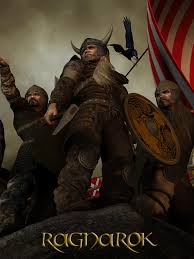 Here’s a TGIF for you:

Now's the time to cash out your life insurance policy and have a little fun, because, according to Norse mythology, the world is ending this Saturday.

Sorry to be a bummer, but you should know we're about 100 days into an epic battle that will culminate with the earth falling into the sea, NPR explains.

For those whose understanding of Norse mythology begins and ends with the Marvel Comics' version of "Thor," the story behind Ragnarok, aka the "Viking apocalypse," or "doom of the gods," is arguably more spectacular and imaginative than anything Hollywood could dream up.

Here's what's coming, according to Time magazine. On Saturday a huge battle commences among the various Norse gods. All the heavy hitters will be in attendance — Thor, Odin and Loki to name but a few.

They'll fight (and when gods fight, it gets messy). Eventually, the Earth will split open, Viking-Mythlogy.com explains. Residents of the underworld will surface.

Fortunately, you'll be long gone — meaning all your worries about mortgages and breakups and thinning hair will be but a sweet memory lost to the mists of time. (info via NPR)