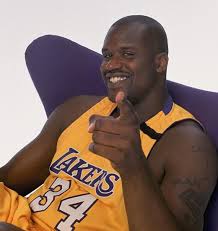 What a great half-time ceremony honoring Shaquille O’Neil tonight. Putting his jersey number up there with the other Laker legends was a touching moment. The Hall of Fame isn’t far away.

It was cool seeing Phil Jackson there along with other Laker greats (Jamaal Wilkes, Kareem Abdul Jabbar, James Worthy, Jerry West & more) who showed up to honor him. Good speech by Shaq. Kobe had a classy tribute to his old team mate too.

In a tough year for the Laker organization – with the death of Jerry Buss and multiple star injuries – the Lakers are struggling to make the playoffs. They’ll be lucky to hold down the 8th seed - which means they’ll have to face the high power Spurs.

Tonight’s win – 101- 81 – means the Lakers will stay on pace for the last seed. Kobe was fantastic with a triple-double, and Earl Clark brought energy, points, and rebounds off of the bench.

Every game counts now, with only nine left in the regular season. There’s no telling when Steve Nash will be able to play again. Metta World Peace is weeks away from playing. So players like Clark, Jamison, Blake, and Meeks really need to step up if the Lakers hope to make the playoffs.