Why some older men get the ‘Grumpy Old Man Complex’ 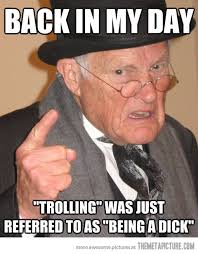 When I turned 60 a couple of years ago, nothing earthshaking happened. I did not suddenly become a grouchy old man. I didn’t instantly morph into Archie Bunker. And let me also add that the following article about grumpy old men is malarkey (thanks Joe Biden)!

Talk about a bad rap. My wife actually says I’m nicer now, and less likely to lose my temper than ever before. She tells me I’m aging like a good wine (not whiner) and that the silver in my hair looks distinguished. So, before seizing on the stereotype the author has projected, consider there’s no empirical research out on grumpy men when they hit 60.

The doctor in the article can go on all day about low testosterone, but I don’t think he’s looking at the whole picture. Men can get cranky about a lot of things, at any age. So I bid you consider this when you read the following: 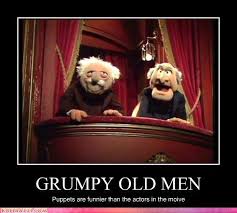 “The look: A scowling face, a wagging finger, and a shaking head. The targets: The economy. Teenagers. Windmills.

Some informally dub it “grumpy old man complex.” British author Carol Wyer labels it “irritable male syndrome,” a spike in the outward crankiness of guys of a certain age.

As more baby boomers hit 60 — the age when male grumpiness seems to kick in — be ready for a growing chorus of grouchy flare-ups, like a Donald Trumprant set to explode.

The condition isn’t just a stereotype represented by the proverbial fist-waving shout, "Get off my lawn!"Testosterone levels generally fall as men age, according to the Mayo Clinic. Such hormone drops are known to dampen male moods, says Dr. Ridwan Shabsigh, head of the International Society of Men’s Health and a urologist in New York City.

“Testosterone is a hormone that grows muscles, reduces fat in the body, affects energy, and improves sexual desire,” Shabsigh says. “However, it also has neural-psycho effects. And in some men we encounter in our practice, those affects can be mostly visible: low mood and irritability."

Grumpiness is even used as a mood description in screening questionnaires for low testosterone. One form many U.S. male 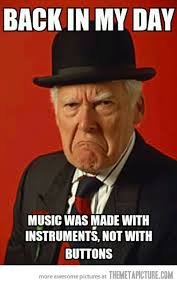 patients are asked to fill out is a test for Androgen Deficiency in Aging Men (ADAM). Androgen is the family of hormones that controls the development of masculine traits. Question No. 6 on that form reads: “Are you sad and/or grumpy?”

“Patients with low testosterone tell me they feel less capable of concentration. And they feel less capable of tolerating the nuances of everyday life – from family, friends, colleagues and customers,” Shabsigh said. “Whatever you do, you have people around you, and you get irritated sometimes. The ability to tolerate or deal with it is reduced when the testosterone is low.”

Certain metabolic and kidney diseases, including diabetes, are known to cause abnormally low testosterone, Shabsigh says, adding the prevalence of those disorders rises with age.

It's not always hormones or other physical health issues, though. Men aren’t as likely to share worries or concerns about aging which can leave a guy prone to flailing outbursts into the ether. Older-guy grumpiness can also be traced to major life changes like retirement that come with advancing years, Wyer says.

“Women have friends and we talk about our problems and we take medication and all that kind of stuff. But for men, it’s something they suppress. It’s a male thing ,” says Wyer, author of the upcoming humor book “How Not To Murder Your Grumpy."

Feeling that they no longer are useful, especially, if a man has held an important position in employment prior to retirement, "can result in severe depression at worst and general grumpiness at best,” Wyer said.

Wyer's husband of 25 years, John, turned 60 this year and became very grumpy just after his birthday, she says. "I have spoken to other women in the same position who have said exactly the same: Husbands, even those who have looked forward to a big birthday, have become morose soon after,” Wyer says.

John Wyer, who owned his own business and misses "the cut and thrust" of his work, has self-diagnosed his own occasionally gloomy anger as something of a byproduct of Western society’s collective view toward — and value of — people who are 60 or beyond. 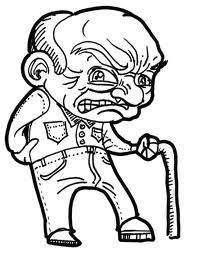 he things that really took hold of me was the fact that I was approaching a ripe old age, let’s say, and I felt society can cast you off as a little bit of a no-hoper. I just feel that isn’t right. I feel people in increasing years have a lot to offer.

And they shouldn’t cast off to one side. And I suppose my grumpiness is a little bit of a protest against sliding down that particular route,” he said.

“You think, well, gosh, there’s got to be to be something a little more than this. Being grumpy is just my way of getting through it and laughing at myself.” (Source)

I still think you're a whiner,