Homer Simpson is doing his civic duty once again this election season.

In a new "Simpsons" short released on YouTube Wednesday, the doughnut-loving goofball heads to the polls to decide whether to vote for Barack Obama or Mitt Romney ... and he's not too pleased with having to do so.

"Why do we have to choose our leaders?" he gripes. "Isn't that what we have the Supreme Court for?"

The digs about politics and the 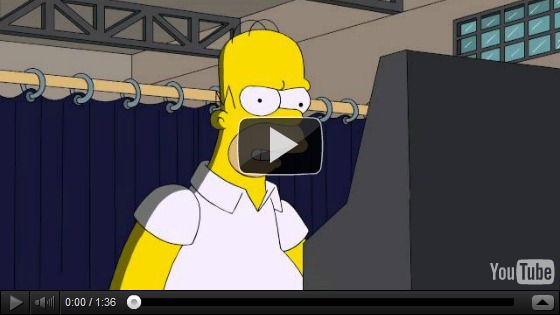 Homer does it again…
elections keep on coming after that, with references to new voter ID laws, health care reform, religion and more.

Homer also targets Obama and Romney with his insightful observations.

"He promised me death panels and Grandpa's still alive!" he complains of the president.

As for Romney, "I hear he wears magic underpants," Homer says suspiciously.

But after some serious consideration, he does finally cast his vote ... and instantly regrets his choice. Check it out. (source)