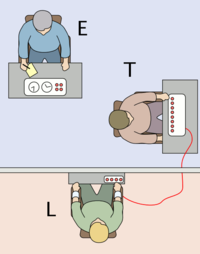 Psychology as we know it is a relatively young science, but since its inception it has helped us to gain a greater understanding of ourselves and our interactions with the world.

Many psychological experiments have been valid and ethical, allowing researchers to make new treatments and therapies available, and giving other insights into our motivations and actions. Sadly, others have ended up backfiring horribly — ruining lives and shaming the profession.

Running along a similar theme similar to the Milgram experiment (see diagram above), The Third Wave, carried out in 1967, was an experiment that set out to explore the ways in which even democratic societies can become infiltrated by the appeal of fascism.

Using a class of high school students, the experimenter created a system whereby some students were considered members of a prestigious order. The students showed increased motivation to learn, yet, more worryingly, became eager to get on board with malevolent practices, such as excluding and ostracizing non-members from the class. Even more scarily, this behavior was gleefully continued outside of the classroom. After just four days, the experiment was considered to be slipping out of control and was ceased. (Read about more examples here)

Posted by ImBlogCrazy at 8:46 AM