As It Stands: GOODBYE! I’M SAILING OFF INTO THE HORIZON

No more Dave to kick around. I’m moving on to new adventures. People to see. Places to go. Things I want to do.
I can quit feeling like the Rodney Dangerfield of journalism on the north coast. No respect I tell ya. I get no respect. I’m just that crazy freelancer who writes a column for the newspaper, and who has a debatably local blog.
“I told my psychiatrist that everyone hates me. He said I was being ridiculous - everyone hasn't met me yet.” - Rodney Dangerfield.
Well folks, that’s in the past now. My witty words will no longer grace this publication and I’m going to blow up my blog! You won’t recognize me aro

und town either because I don’t look like the photo you see on this page.
I have grown a long scraggly beard Blackbeard would have been proud of, even though it’s more gray than black.

Then I donned a black eye patch. It seemed like a good idea so irate readers and critics wouldn’t recognize me in public. Disappearing won’t be hard. I’ll miss my readership. All three of you.

I plan to do a Forest Gump and walk across the country for no good reason. I’m having some difficulty putting together a support team. My wife assured me she wouldn’t go along with anything so stupid, so I turned to other family members and friends. Guess what? No takers! I guess that means you’re my last chance.
If any reader is moved by my mission to walk aimlessly to the east coast and wants to help, they can contact me via the e-mail address at the end of this column.

I also have other plans.
When I get back to the north coast after my meaningless journey east, I plan to become a crab fisherman. After years of watching my next door neighbor, a Vietnam veteran who owns his own boat, with 300 plus crab pots, I think I’m experienced enough to take on this new profession.

I’ve watched him stack the smelly things at the end of each season. I’ve observed the proper methods of taking out the little yellow and red floaties inside, and smelled the sea for months - the odor from the pots wafting gently, but persistently, to my front porch and making me gag.
Then one day I stopped hurling when I opened the front door, and realized I was a seasoned salt! The rotten crab stench had turned to flowers in my olfactory system, and a time of change lingered in my nostrils.
At 62 years-old, it’s not a common thing to change course in your life work. I’ve been a wordsmith since I scribbled my first graffiti on my desk with a penknife. As a journalist, I’ve researched and written about countless subjects over the years. 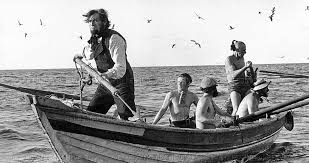 But now, a new destiny calls. A new purpose. I’ve lived within walking distance of the sea for decades and now its allure says, “Join me, you crazy old man. I’ve got a ticked-off White Whale who wants to meet you!”
Obliviously that siren call has mesmerized me. Yes, I’m the same guy everyone calls “Chicken of the Sea” because I’ve always hated going out in a boat.

My only experience was a fishing trip on a half day boat in Palos Verde in the 70s. I puked like the worst landlubber ever, and watched helplessly seasick, as the rest of the people drank beer and had fun fishing.

Upon reflection, I think the whole idea came up when I started to wear the black 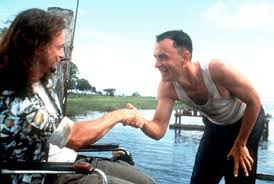 eye patch. I got into a habit of calling my grandchildren “mateys” and talking like a pirate. The performance was good enough to get approval from all five.
Nothing ventured,nothing gained.Right? Sure,it won’t be easy to get a boat.There’s this little issue of money.If I can find one for sale then I’ll have to raise the shekels to purchase it.
Or, I suppose I could wait until someone from my old unit in Vietnam showed up in a wheelchair (like Captain Dan in Forest Gump) with his own crab boat and in need of a partner. I know that’s a bit of a stretch because everyone in my platoon was a landlubber.
If there’s anything that really makes me hesitate about this new profession, it’s the fact  I can’t stand the taste of crab!
As It Stands, April Fools! See ya next week.

I'm glad to see I got away with pulling your chain once again - how many times has it happened during the last four and half decades?

thanks for stopping by bro...

Dave
I was already to organise a Dave Stancliff Suport Group to see if we could talk you out of this silliness. Even after I figured it out... I still think that we need to form a help group for you!

I'm sure there's some who don't think I'm right in the head! Ha! Ha!