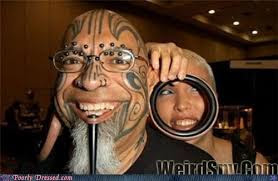 How are you this morning? C’mon in and have a cup of hot coffee with me. Are you going to be one of the thousands of post Christmas shoppers today? Many Americans have today off and retailers are trying to cash in one more time before the year ends.

As for me…I’m content to stay at home and relax. Whatever you decide to do, make it a good day.

In some primitive cultures, beauty and status are displayed via large holes in the earlobe from which to hang heavy ornaments or to insert jewels or tokens, and BBC News reported in November that an "increasing" number of counterculture Westerners are getting their lobes opened far beyond routine piercing, usually by gradually stretching but sometimes with a hole-punch tool for immediate results. The hard core are "gauge kings (or queens)," showing a "commitment" to the lifestyle by making holes up to 10 mm (three-eighths inch) wide. (Cosmetic surgeons told BBC News in November that they're already preparing procedures for the inevitable wave of regretted decisions.) [BBC News, 11-21-2011]

A 1941 fruitcake has sold for $525 to an Arizona man in an Ohio company’s online auction, and the money will go to the homeless in southwest Ohio.

Elite Estate Group sold the cake in an auction on its website. Company owner Larry Chaney says the man, who wanted to remain anonymous, probably bought the cake as an investment.

Chaney says he doubts anyone would eat a 70-year-old fruitcake even though it was vacuum packed and contained rum that probably helped preserve it.The cake was made in 1941 by The Kroger Co. It was returned unopened to a Kroger store in 1971. The manager took it home and kept it until recently when his son was helping him get rid of some things and gave the cake to Chaney.

Posted by ImBlogCrazy at 8:27 AM