Dog shoots hunter in butt, ex sheriff caught trading meth for sex, and a trio of shoplifters hit 91 stores before being caught 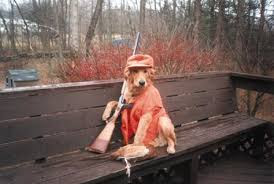 Good to see that you decided to stop by and visit. C’mon in and have a cup of hot coffee with me and relax. I’ve got several thought-provoking stories for you this morning. Enjoy:

A bird hunter in Utah was shot in the buttocks after his dog stepped on a shotgun laid across the bow of a boat. Box Elder County Sheriff's Deputy Kevin Potter says the 46-year-old Brigham City man was duck hunting with a friend 10 miles west of the city when he climbed out of the boat to move decoys. Potter says the man left his 12-gauge shotgun in the boat and the dog stepped on it, causing it to fire. It wasn't clear whether the safety on the gun was on at the time. A report on KSL.com said the men called 911 and walked to the main road to wait for emergency crews. Potter says the man was hit from about 10 feet away. He says the man wasn't seriously injured, in part because he was wearing waders.

The Salt Lake City Tribune said the wounded hunter was transported to Brigham City Community Hospital about 9 a.m. Sunday, where doctors removed 27 pellets of birdshot. It said neither the dog, nor any ducks, were injured.

Lately pillars of the community have been getting in trouble. First Jerry Sandusky and now former sheriff Patrick Sullivan.

A former U.S. national sheriff of the year found himself in a jail that was named for him, accused of offering methamphetamine in exchange for sex from a male acquaintance.

Colorado lawman Patrick Sullivan, 68 — handcuffed, dressed in an orange jail uniform and walking with a cane — watched Wednesday as a judge raised his bail amount to a half-million dollars and sent him to the Patrick J. Sullivan Jr. Detention Facility.

Coming this Sunday (Dec. 4th) in the Times-Standard:

Police say it's a very naughty list, sometimes checked twice. A New York couple and a teen are in custody charged with shoplifting thousands of dollars in toys in a three-state spree that ended in western Pennsylvania.

Authorities say the thieves used a list to keep track of the 91 stores they hit for merchandise — sometimes marking a store with two check marks after hitting it twice. Ross Township police say they found a rented van filled with stolen merchandise on November 16 after arresting 40-year-old Theresa Lynn Warner, her 39-year-old fiance Christopher Frances Dimaio and her 17-year-old son. All three are from Little Falls, N.Y. Investigators say they also recovered a list of stores in New York, Pennsylvania and Ohio where the trio swiped merchandise. All three are in custody. It wasn't clear if they had attorneys.

Posted by ImBlogCrazy at 8:53 AM