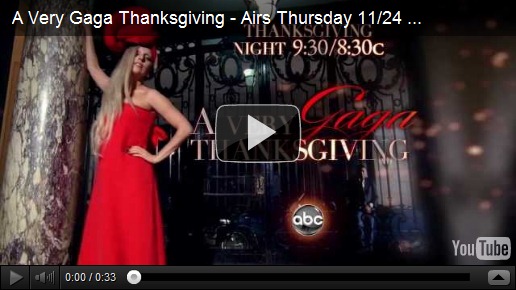 Gaga and Tony Bennett perform a duet…now I’ve heard everything.

Good to see today. I’m glad you stopped by. There’s some virtual hot coffee available, so grab a cup and a comfortable seat. Here’s today’s offerings:

ABC is celebrating Thanksgiving this year with "A Very Gaga Thanksgiving," a 90-minute prime-time special hosted by, naturally, Lady Gaga. The first promotions for the special, which was conceived and directed by Gaga herself, seem to preview an unexpected side of the well-known provocateur that her fans may have not previously seen. Rather than shocking outfits or elaborate stage performances (though those may be in store as well), ABC has announced that the special will feature Gaga performing a duet with 85-year-old jazz singer Tony Bennett, a tearful interview with Katie Couric and Gaga learning to make deep-fried turkey and waffles for her Thanksgiving guests with chef Art Smith.

Duck hunting is an obsession in U.S. town

Rocker Ted Nugent has hunted duck in the state of Arkansas. So have former U.S. Vice President Dick Cheney and Secretary of State Hillary Clinton. The small town of Stuttgart, population 9,745, is known as the duck capital of the world. For the next two months, thousands of hunters will contribute more than about $1 million a day to the local economy, according to the Stuttgart Chamber of Commerce.

The town thrives on its duck hunting heritage. Businesses erect banners welcoming hunters. A local motel is named the Duck Inn and has the Duck Blind Lounge. The Museum of the Arkansas Grand Prairie hosts a permanent exhibit called the "Waterfowl Wing" that duplicates a duck hunt, and posh duck lodges sit on prime hunting land on the outskirts of Stuttgart.

Jordan Johnson, 33, started hunting at age 14. He said duck hunting is an experience accessible to anyone in Arkansas. "Duck hunting in Arkansas is more about sharing the outdoor experience with friends, family and business associates than hunting ducks," Johnson said. "There are just as many business and family decisions made in a duck blind as there are at any boardroom or golf course."

Funeral services were pending Monday for the Rev. Maurice Chase, a Catholic priest known as "Father Dollar Bill" for his holiday giveaways of $1 bills to the homeless on Skid Row.
Chase, 92, died Sunday night at his home in Los Angeles after a battle with cancer, according to his nephew, Robert Boyd.
"He was a really great, colorful, wonderful man," he said.
Chase was a fixture on Skid Row in downtown Los Angeles on holidays such as Easter and Thanksgiving. The homeless and poor would line up for blocks as Chase would hand out $1 bills -- or sometimes larger denominations to the particularly needy.
On Easter, Chase stood outside the Salvation Army shelter and handed out about $20,000, much of which was donated by celebrities including Bob Newhart and Dolores Hope. Last Thanksgiving, he handed out about $15,000.