Grab a cup of Joe and take a load off this morning. There’s always something happening of interest. For example: 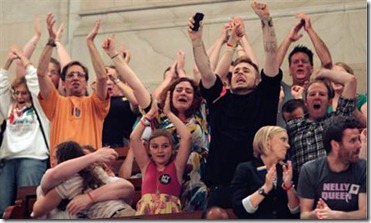 Gov. Andrew Cuomo signed New York's gay marriage bill into law late Friday, paving the way for what is expected to be a crush of gay weddings starting in 30 days.

New York will become the sixth state where gay couples can wed and the biggest by far.

I have a niece who is going to be glad to hear this news.

Salvors searching for a sunken 17th-century Spanish galleon said they found a gold and emerald ring with a rectangular cut stone estimated at 10 karats while diving 35 miles west of Key West Thursday.

They say they believe it is from the Nuestra Senora de Atocha, which sank off the Florida Keys during a 1622 hurricane.

The ring was found by divers from Mel Fisher's Treasures, who were looking for the sterncastle of the Atocha.

Luke Chrisco, 30, was arrested recently and charged with hiding inside a toilet tank at the Hanuman Yoga Festival in Boulder. A woman about to use the toilet, cops reported, noticed “movement in the tank” and alerted a man who spotted the feces-covered suspect “hiding inside the tank.