Pull up a chair, or a beanbag, and have a cup of tea or coffee with me. I got a late start this morning so I had to pour my first cup over my head! While slurping on my second cup, I read that coffee drinkers will soon be getting another jolt at the supermarket as the Price for a cup of joe is going up ... again.

Huguette M. Clark, the mysterious copper heiress who became the subject of public fascination and police investigation after a century of life as a recluse, died Tuesday morning at age 104, registered under a fake name at a hospital in New York City. Her empty mansions, and a criminal investigation into the handling of her fortune, were the subject of a series of reports last year on msnbc.com.

I blogged about her last year. The criminal investigation continues into the handling of her money by her attorney and accountant, with detectives and a forensic accountant poring over the many years of Clark's financial records.

Her wealth was managed by her scoundrel attorney, Wally Bock, 79, of Queens, N.Y., and her certified public accountant, a felon named Irving H. Kamsler, 64, of the Bronx, N.Y. I hope these two get the justice they so richly deserve for stealing from Huguette all these years!

S. Victor Whitmill, the tattoo artist who created the original mark for boxer Mike Tyson (shown here on actor), who appears in both Hangover films, sued April 28 seeking an injunction and damages for copyright infringement.

Story: Can 'Hangover 2' serve up another round of success?

My wife and I went to Chico this past weekend and it was hot. Sun bur 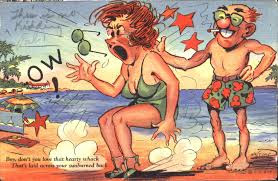 n hot. Living on the coast has spoiled me, and I’m only comfortable with moderate temperatures these days.

We once lived in the desert, Twentynine Palms. Never again!

Extreme heat and sun calls for protection. Do you know what the top sunscreen is? According to this report, the cheapest is the best!

That ought to be good news for everyone heading into warmer climates this upcoming Memorial Day Weekend.

I thought I saw the most absurd thing in the world a while back when I watched a documentary on Chernobyl, and how it’s become a tourist attraction today – despite still  being highly radioactive! But no! Now some people are looking into making Osama bin Laden's compound a tourist attraction! No shit!

The official tourist map for Abbottabad urges visitors to discover its "hidden" treasures.

"It was a very important event, and I believe people from around the world would be very interested to visit it," said tourism official Yar Mohammed.