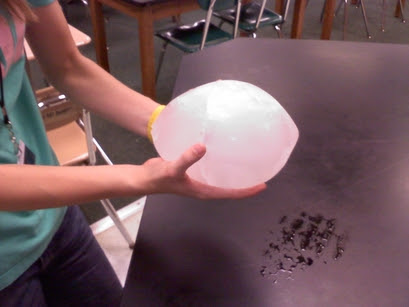 Got my coffee and I’m ready to go. Take a load off and join me. The national weather continues to be the top story in the news:

Violent weather swept across the Eastern seaboard, dropping heavy rains that flooded towns from New England to Georgia, knocking out power and killing at least three people in the Atlanta area.

Caroline Floyd, lead meteorologist at The Weather Channel, wrote on its website that Saturday would be "another day of thunderstorms in the Northeast."

Melon-sized hail that fell during a severe thunderstorm in Norman, OK. … Read more »

Palin not invited to this rally by current organizers, but she still plans on attending.

One day after Sarah Palin announced her bus tour, a group sponsoring a Memorial Day weekend event she plans to attend said they never invited her.

The elderly-looking gun-toting robber nicknamed “Grandma Bandit,” blamed for a string of heists of several Atlanta-area drugstores, was actually a man, police say.

The revelation was made by police Friday evening, hours after the suspect was fatally shot after a police chase, The Atlanta-Journal Constitution reported.

Posted by ImBlogCrazy at 7:49 AM