The Pug Report: ‘What’s with Millie? We had to take a new route today!’ 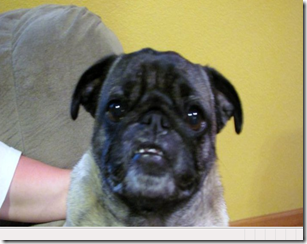 Okay. Something is up.

After two years of walking the same route every day, Millie refused to go that way today! Say What? She was fine with going in the opposite direction – and we did end up taking a good walk in new territory, but that’s not the point.

Why? Is that “Supermoon” today/tonight a Bad Moon rising?

“Even more than a normal full Moon, this “super Moon” gets a bad reputation for triggering natural disasters thanks to stories posted on the Internet. NASA says the facts don’t back that accusation. They point to the “super Moon” of March 1983 and the “almost super Moon” of December 2008 that resulted in no natural disasters occurring. In fact, the National Oceanic and Atmospheric Administration (NOAA)  states that lunar gravity at perigee will only pull tide water nor more than an inch or so higher though local geography could result in a pull of up to six inches. That may be alarming if you’re an insect living on the beach, but it shouldn’t be to humans.” Source

I have to admit that I’m still mystified by her behavior. What was suddenly different today? Or, was it something simple like just being tired of the same old walk and she opted for a change? Maybe I’m wasting my time wondering what a pug is thinking. Especially a female pug! Like her human counterparts, she reserves the right to change her mind…anytime.

Now if it wasn’t for this guy’s prediction: “Earthquake forcaster Jim Berkland warns of a 'high risk' seismic window and potential for a massive quake poised to strike somewhere in North America in between the dates of March 19th and 26th,” I’d be fine and would think no more on the subject. Does Millie know something I don’t? I guess I’ll have to wait and see.

Posted by ImBlogCrazy at 1:23 PM

love that dog photo...I'll watch for the super moon. Daniel

Sometimes animals know much more than we. Is it possible that by changing your routine she saved your life? Sometime it's worth thinking about. Just in case, tell Millie thanks from all of us out here in Blogland.