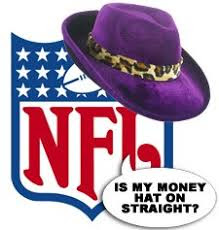 “For the first time since 1987, the National League Football has officially entered a work stoppage.

It came with a whimper.

As of 12:33 a.m. ET, the league hasn’t released a statement on the matter.  (The collective bargaining agreement ran out at midnight.)  NFL Network did announce on air, however, that the owners have imposed a lockout on the players, and NFL.com also has a story on it.

The Associated Press also confirmed the move and teams received an email notifying them a lockout was imposed.

The start of the lockout will set off a number of legal maneuvers.  The players have gone to court in an effort to block the lockout.

They have filed an antitrust lawsuit — officially known as Brady et al vs. National Football League et al.   The owners are expected to try to prove that the NFLPA’s decertification is a sham.   That argument could have problems.”   Image source      FULL STORY

Maybe some tea party person will take away their bargaining rights.
I wonder how many of them were in the streets or the Wisconsin capital standing up for those rights.