Here’s a list of inventors killed by their own inventions 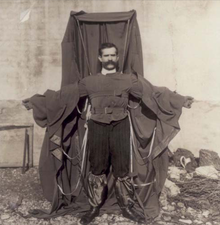 This is a list of inventors whose deaths were in some manner caused by or related to a product, process, procedure, or other innovation that they invented or designed.

PHOTO - Franz Reichelt (d. 1912) attempted to use this contraption as a parachute. Reichelt died after he jumped off the Eiffel Tower wearing his invention, which failed to operate properly as a parachute.