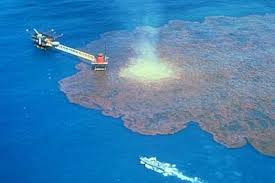 This information comes as no surprise to many scientists who were involved with the clean-up and tracking of the spill. It’s probably news to the average American, who should be outraged.

The stinking mess from this spill is going to carry over into generations of fish and wildlife.

“The Obama administration blocked efforts by government scientists to tell the public just how bad the Gulf oil spill could become and made other missteps that raised questions about its competence and candor during the crisis, according to a commission appointed by the president to investigate the disaster.”

Posted by ImBlogCrazy at 4:16 PM

This comes as no surprise, what is surprising that he frolicked with his daughter in the Gulf, ate the seafood (probably flown in from Maine) and acted like everything was fine.
This administration will stop at nothing to fiddle while America burns. They are a hideous example of how NOT to be Presidential!

The fish, birds, the young sea animals, the embryos of every animal, and all the sea vegetables are tainted or destroyed for years to come. This is a toxic disaster of such great magnitude, and he (O-Vomit) attempted to sweep it under the Seaweed! God forgive these insane people they care to know not what they do! Sickening is what they are, disgusting, megalomaniacs with egos that consider themselves to be the most important piece of sand on the Beach! How Horrid they are!
Trudith