It’s down to this - parties' economic plans: blame the other guys

What can Americans expect from the upcoming Nov. 2 elections? Answer: the same old shit! Isn’t that encouraging? 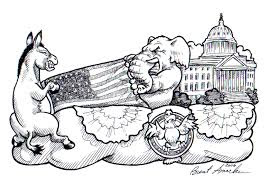 As time before midterms draws short, lots of charges but few solutions

“If you don't like the economy, blame President Barack Obama and Democrats because they're making times tougher, Republicans are telling voters entering the four-week homestretch to an election the GOP hopes will return the party to power in Congress.

Look, Democrats say, it's the Republicans who caused the financial meltdown and recession. Do you want them to do it again? As bad as high unemployment, record home foreclosures and bankruptcies are, they'd be worse if the GOP had succeeded in blocking financial and auto industry bailouts and Obama's stimulus plan, Democrats claim.”