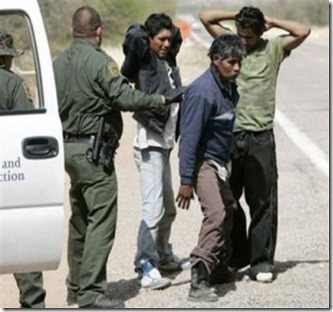 Simmering racial tensions boiled over the moment Republican Gov. Jan Brewer of Arizona signed immigration law SB-1070 on April 23rd. Outraged Hispanics, religious leaders, Democratic lawmakers and left-wing activists across the country quickly responded. They organized boycotts against the state of Arizona. They all fear racial profiling will happen when this new law goes into effect in July.

Illegal immigration is dividing this nation, according to recent polls. The latest Rasmussen poll found that 70 percent of Arizonians actually support the controversial new law. The poll also noted that 53 percent of those questioned had concerns the law would violate the rights of U.S. citizens in Arizona.

Nearly two-thirds of Americans -- 64 percent -- approved of the law in an NBC/Wall Street Journal poll. The Pew Research Center for the People and Press reflected those findings. Lawmakers have introduced similar measures, or have announced plans to do so, in 12 other states.

A new NBC/MSNBC/ Telemundo poll shows that White and Latino Americans are deeply divided over immigration. The poll shows 70 percent of whites support the law, versus just 31 percent of Latinos. In fact, 58 percent of Latinos say they strongly oppose it. Only 22 percent of the country's Latinos have a favorable view of the GOP, according to the poll.

Although 70 percent of Arizonians and 64 percent of Americans approve the new law, SB1070, I'll bet close to zero percent have read and understand key parts of the law.

One part says, "ANY PERSON WHO IS ARRESTED SHALL HAVE THE PERSON'S IMMIGRATION STATUS DETERMINED BEFORE THE PERSON IS RELEASED."

That statement has no exceptions. If you are arrested for jaywalking and immediately pay the fine, the new law says you shall not be released until you prove you are innocent of the crime of being an illegal alien. Arizona is trying to strip you of your First Amendment right to due process, your Fourth Amendment right against being seized without probable cause of committing a crime, and your Fifth Amendment right to remain silent. These amendments apply to all people in the United States. You do not have to prove your U.S. Citizenship before you are allowed to exercise your constitutional rights. Supposing that the Feds have screwed up and Arizona should take strong measures, those measures should be not so blatant a violation of the U.S. Constitution.

See for yourself at House Engrossed Version (Chaptered Version).