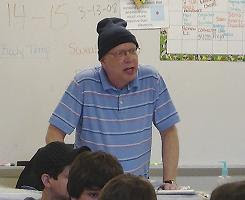 Was Bill Sparkman a victim of an anti-government killer? His mother thinks she knows what happened, but is waiting to see what the FBI come up with.

MANCHESTER, Ky. (AP) — When Bill Sparkman told retired trooper Gilbert Acciardo that he was going door-to-door collecting census data in rural Kentucky, the former cop drew on years of experience for a warning: "Be careful."

The 51-year-old Sparkman was found this month hanged from a tree near a Kentucky cemetery with the word "fed" scrawled on his chest, a law enforcement official said Wednesday, and the FBI is investigating whether he was a victim of anti-government sentiment. Click here to read the rest at USA Today/ AP Photo

This will definitely be a murder case!! The people in that part of the country don't get involved in political agenda some don't even know who Obama is!! This area has been having Feds busting for drugs, election fraud, murder etc... they probably didnt know what a census worker is!! I know these things before I lived in that area for 10 years!!!