When is shaking hands inappropriate? When Conservatives say so! 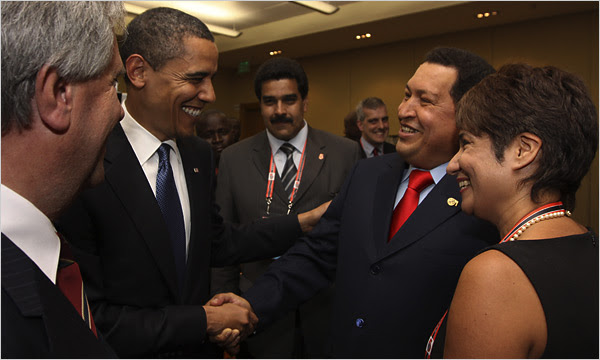 The latest Conservative outcry over President Obama shaking hands with President Chavez, is so stupid that I can't believe people are really getting upset over it. Blogs are having a banner day with this latest obstructionist tactic.

Newt Gingrich, one of many carnival barkers for the Republican Party, was on CNN this morning whining and claiming that Obama shouldn't go around shaking hands with other world leaders who are not in lock-step with America. I guess he's forgotten about President Nixon's visit to China, when they were our open enemy, or President Reagan going to Communist occupied Berlin to thaw out relations between the two countries.

Short-term memory, and no recollections, seem to plague those Conservatives that are making this world goodwill tour by Obama seem to be a negative thing.

Apparently history means nothing to a party that is looking for any way to attack Obama. Their efforts are pathetic and only encourage more polarization in this country.

THE NEW YORK TIMES  has an article this morning about Obama meeting with Western Hemisphere Leaders, and talks about his encounter with Chavez.

MEDIA MATTERS FOR AMERICA has a video of Fox New's response to the now controversial handshake.

FOREIGN POLICY BLOG has this take on Obama's visit.

photo via The New Yorks Times

ah,now don't go beating up on me, because Humboldt County's "liberals" say I'm conservative, but I find no problem in shaking hands.

Plus, although I haven't read the book Chavez gave Obama, I do know my history.

You might be able to find them on Abebooks for cheap.

Colonialism, imperialism, post-colonialism and post-imperialism have contributed to bad will.

Conservatives should at least give the president a break on this issue.

But remember Chavez confiscated the computer of the main Human Rights Watch observer and kicked him out of the country.

So, while shaking hands might be diplomatic, I would definitely bring some handy wipes.

Remember not to generalize.