Trump Keeps on Winning...in His Mind 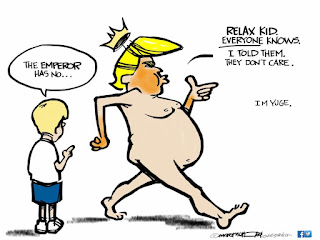 You may think that Trump is really getting into some deep shit (he calls it Deep State) lately and things looks bad for him.

Just because a mystery senior member of the White House wrote an Op-Ed that the New York Times plastered all over it's front page describing Trump as unhinged, you might think he would be in retreat. Bad optics, and all.

In Trump's mind he's winning. With reality closing in on his troubled presidency he's lashing out like any twisted sociopathic-narcissist would.

In other words, he's attacking everyone. In the recent flood of revelations about Trump in the White House we see an emerging pattern. The bastard is crazy!

From Day One, when Trump instructed mealy-mouthed Sean Spicer to lie about his inaugural crowd Americans have been subjected to the worst presidency of modern times...awwww hell with it, in history!

Apparently people in Trump's administration have known all along what an amoral piece-of-shit he is, but have held their noses to further their careers.

That is until tidbits of Trump's antics in the West House began leaking out within months of his administration. Now, like rats fleeing a sinking ship, we'll see more Trump staffers resign as his corruption turns into a constitutional crisis.

Trump is reported to have once said - in a book ghost-written by Tony Schwartz - that all publicity is good, and there is no bad publicity. The book's publisher however, Howard Kaminsky, said that Trump played no role in the actual writing of the book. You may have heard of it...The Art Of The Deal.
The point is, as long as Trump can dominate the news cycle it doesn't matter to him how he gets there.

I wonder if his views are changing with the specters of impeachment, and Amendment 25, lurking around the corners?

Probably not. The egotist is his dominate side. As long as he has a core base to play to he'll continue to walk down Fifth Avenue naked...sure that no one can see that the emperor has no clothes on.