The Bedminster Blues: Trump is Not Winning Lately 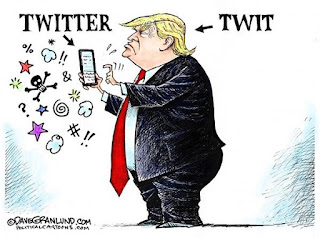 The orange ogre currently occupying the president's seat in the Oval Office, has retreated to his golf course in Bedminster, New Jersey, amidst so many scandals and investigations that he can't keep track of them.

Trump's math skills mirror his famous reading skills, he doesn't do either. That's why he claims he only gets "good people" to take care of everything.

You know, like Michael Flynn, Paul Manafort, Scott Pruitt, Wilbur Ross (read the charges against this crook whose still in office), Steve Bannon, Stephen Miller, Jeff Sessions, and a host of other loser Trump minions.


Signs that Trump is not winning:

The Mueller investigation is still ongoing and convictions are piling up with no end in sight.

Paul Manafort is fighting to stay out of prison. Today is the seventh day of his criminal trial for bank and tax fraud. Ex-Trump cohort, and former business partner, Rick Gates, is getting leniency for testifying against Manafort on day five.

The specter of Manafort flipping on Trump looms if he's convicted on all counts.

Trump twitters shade against CNN host Don Lemon and NBA great, Lebron James. Everybody came out against Trump on that stupid tweet...including his wife!

Once again Trump tweets pure bullshit when he claims California wildfires are caused by rivers draining into the ocean! Experts in California and the nation severely rebuked that idiotic statement.

Noticing a pattern here? It sure isn't about winning.

I'm surprised Trump didn't have a heart attack when the news came out about his precious "wall" two days ago when the Government Accountability Office released a report stating the whole process was hurried, ill-planned and would go way over budget estimates. Ouch!

The Department of Homeland Security was criticized in the report for picking sites for Donny's pet project before taking into account how effective a wall would be, and the cost.

Trump is also setting himself up for another loss with his threats to shut down the government if he doesn't get his wall. It's unclear if this report will have any effect on the asshole.

Listen...I could go on, but you get the point. In the real world Trump is not winning lately, and that's why the Bedminster Blues...(aka the tweet storm).