WH Soap Opera Fans Tune In To Another Sleazy Drama 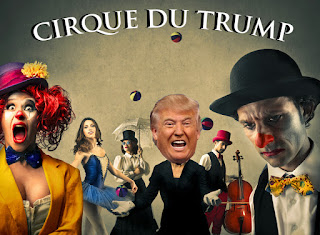 Let's start the day with another episode of Cirque Du Trump, staring aides who have been bad.

A top aide to Trump, Rob Porter is resigning under a cloud of spousal abuse.

After months of the White House claiming that Porter was full of integrity and honor, it only took one day for the White House PR machine to flip-flop from that position like a dying carp.

In case you're wondering why the sudden change of mind it has to do with the fact that Trump and company knew about his abuse against his two former wives, but covered it up.

Loathing and lies, as lawmakers scramble to come up with a budget.

Watch who screws who, in delicate backroom negotiations worthy of a Banana Republic.

Added tension: Will Trump get his shutdown?

Will the Dems give up and make a deal without DACA included?

Will Trump get his Wall?