Damage Control In Trump Land Is Falling On Deaf Ears 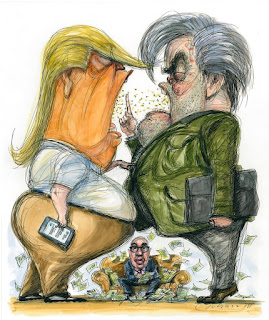 You haven't seen anything yet when it comes to Trump's damage control crew of clowns praising their insane leader in his hour of need.

White Nationalist Stephen Miller, one of Trump's sleazier entourage, appeared on CNN yesterday with Jake Tapper, and really made an ass of himself attacking the interviewer.

But that's only part of the story...

The White House put Miller on four Sunday Shows to dodge, lie, and attack the media.

I've never been more proud about being an Army veteran than I was yesterday when the official Army twitter feed liked a comment made by actress Mindy Kaling.

In case you missed it, she compared her narcissistic character on the sitcom "The Office," to Trump in her viral twitter feed.

That tweet may be gone now - I suspect Donny found out about it - but it was a revealing tell about what our armed forces think about Trumplethinskin.

As far as the rest of the world goes, it's no exaggeration to say that Donny's mental acuity is being seriously questioned by world leaders. Now, more than ever.