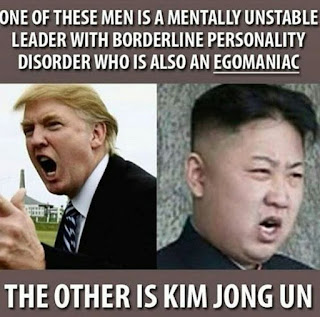 Good Day World!
Have you ever gone with your "guts" when making a decision?
I have, and my guts tell me Trump is nuts. But I'm not the only one who thinks so.
Following Trump's frenzied tweet attacks against two CNN hosts, Rep. Jamie Raskin, D-Md., rallied support for a bill to create an oversight commission to determine whether Trump is "mentally or physically unable to discharge the powers and duties of the office."
The bill had first been introduced in April, but Raskin tweeted Friday that it had 23 cosponsors.
Raskin tweeted: Section 4 of the #25thAmendment empowers Congress to create a body that can confront presidential incapacity. pic.twitter.com/RMBNa2BnsJ
The question of Trump's mental health has been raised by top psychiatrists in the nation repeatedly since he's been sworn in:
Psychiatry Experts Claim Trump Is Unfit For The Presidency due to "Dangerous Mental Disorder'
Trump's regime is under enough fire with the Russian investigation, and accusations that he obstructed justice, without this new line of attack against him.
Raskin also tweeted:
.@POTUS' incapacity must be seriously addressed. That's why I introduced the Oversight Commission on Presidential Capacity Act. #OCPCAct pic.twitter.com/1CvYfTUhYC
Americans are getting sick of Trump's tantrums and obvious personality disorders. To bring home that point just look at what happened Sunday:
Protesters gathered in Austin, New York, Atlanta, Philadelphia, Los Angeles, San Francisco and other cities throughout the country in rallies calling for Trump’s impeachment.
This isn't the first time rallies have been held objecting to Trump, and his policies since he's been elected, and it won't be the last.
Time for me to walk on down the road...
at July 03, 2017