'Pizzagate' - Reluctant Riders On The Storm of Fake News 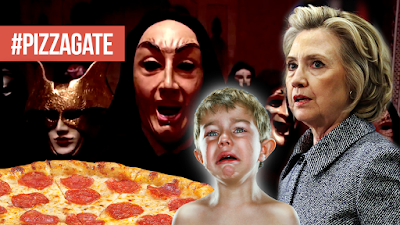 This is how bizarre things are today: fake news gets circulated faster than the real news, and it now poses a very real physical threat to innocent people.

One of the many fake news stories this year involved a restaurant, and a conspiracy theory involving Hillary Clinton and John Podesta running a pedophile ring.

You'd think anyone with half a brain and the ability to read and reason things out would realize it was a fake story.

But no. This outlandish story was passed from one conspiracy theorist to another until one of the morons totally lost touch with reality and entered the restaurant in question with a rifle, firing it a couple of times.

As the police were arresting the clown they discovered he was there to investigate "Pizzagate" because of that fake story.

The theories, collectively known as Pizzagate, resulted in social media attacks and death threats against the restaurant’s staff and their families.

This theory was even spread by retired General Michael Flynn, who recently landed a national security advisor offer from Donald Trump!
What we have here is a case of one restaurant owner, and his 40 employees, being intimidated by an armed gunman who lost touch with reality...or, he was simply - stunningly - that naive or stupid!
The whole business was caught up in the middle of a storm of fake news. The FBI helped out as much as they could by taking the story down off the Internet, but the damage was done.
Employees continued to receive threats. The BBC points towards the story as an illustration of the ease with which fake news spreads.
The outlet interviewed James Alefantis (restaurant owner), who pointed out how conspiracy theorists didn’t even bother to verify the accuracy of key details, including the allegation that the sex ring operated out of the building’s basement: “We don’t even have a basement” he said.
No surprise that the culprits behind this fake story are alt-right weasels (which is the label that white nationalists and neo-Nazis enjoy hiding behind).
Who knows when the next alt-right reader/supporter will walk into that pizzeria hoping to solve Pizzagate with a gun?
Time for me to walk on down the road...
at December 06, 2016