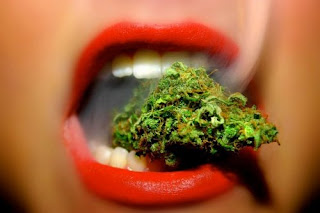 After smoking ganja for 50 years, and researching the many applications that it offers, I'm still always looking for more news about my favorite plant.

One of the more interesting - and less talked about - uses for pot is to enhance sex. I'm talking about other ways than just sparking a bowl and feeling sexy.

As far back as the seventh century, practitioners of Tantra—the ancient Hindu meditation that aims to “channel the divine energy of the macrocosm or godhead into the human microcosm”—have used weed to, well, channel the energy of a different godhead, too.
According to the journal Psychedelic Drugs, which documented the extensive use of cannabis in Tantra: “The Kama Sutra and Ananga Ranga eloquently detail Hindu sexual techniques, and the Tantras transform such sexual practices into a means of meditational yoga.”
One of my favorite stories is the epic Arabian work 1,001 Nights which detailed the intoxicating and aphrodisiac properties of hashish:
“Art thou not ashamed, O Hashish-eater, to be sleeping stark naked with stiff standing tool?”

When people want to get down and funky in India they drink bhang (a kind of weed smoothie made of yogurt or milk, nuts, spices, and ground cannabis).

Folks in Morocco, Egypt, and Lebanon, consume kif, which refers to the cannabis itself, but is also the name of another kind of blended pot drink that reduces inhibitions and impotence, and increases “transcendental experiences.”

More recently, I found out about marijuana lube for sex (I have a hunch this stuff has been around for a long time). It's called Foria.
You spray it on your nether bits with the goal of having a localized, sensory-based high with no psychoactive effects.

Apparently it will also “bring to your fingertips the power of ancient plant medicine to inspire deep healing and unlock profound pleasures.”
(Here’s a video if you want to see women talking about the “beautiful waves” of Foria-induced pleasure.)