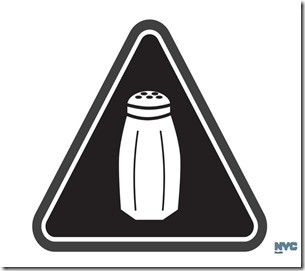 Don’t be surprised if I sprinkle some cuss words into my rant about salt being monitored by Big Brother.

The first-of-its-kind rule requires a salt-shaker emblem on some sandwiches, salads and other menu items that top the recommended daily limit of 2,300 milligrams — about a teaspoon — of sodium.

Hell yes! (I warned you) There’s already a ton of other warnings about different foods  customers consume. Each new one gets more outlandish than the next:

“Don’t eat the spiced buffalo wings because Uncle Sam doesn’t want you to get indigestion and burn the roof of your mouth, and have to miss time from work; essentially making you a bum.”

Who reads all that nutritional stuff anyway? Have you ever seen a customer go into a fast food restaurant and be concerned about calories? Get real.

In all fairness some food warnings are sensible. Like the presence/amounts of mercury in fish.

My concern is that the Food Police are not going to stop with the attack on salt. I fully expect pepper to be the next on the list!

Then it’s really going to get ugly!