Call me silly, but I’m just not comfortable sitting in a restaurant with people openly displaying pistols and assault-rifles.

When I think about how easy open-carry laws make it for nuts of all kinds to shoot people, I have to cringe. Someone as crazy as a loon can buy a weapon and walk around with it in public places now in Texas.

Please don’t tell me loons don’t “legally’ buy weapons. Happens every day. Especially in Texas, a mecca for anti-government and general conspiracy theories where backround checks to buy weapons are a joke.

The loons had to hide their weapons before. Now Texas has made it that much easier for wack jobs to “off” people in public settings by overturning a 145 years-old law. 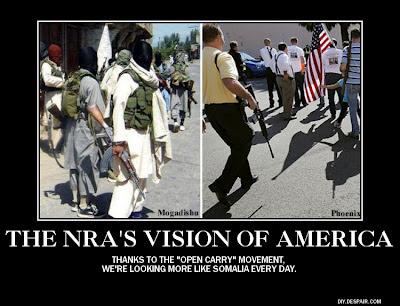 igned a bill that made it legal to openly carry weapons on the streets of the nation's second most-populous state.

Some hailed the new law (fringe elements), and others (the general population) are simply not comfortable with it.

That’s the reason why an iconic Texas restaurant chain will not allow the open carrying of guns on its properties when the law goes into effect next January.

Whataburger — with some 780 locations in 10 states – president and CEO Preston Atkinson said many employees and customers are "uncomfortable being around someone with a visible firearm."

Duh…no kidding. Not too many people enjoy eating in a room full of weapons on display. Doesn’t do much for anyone’s digestion.

en some pro-open carry advocates bring military-style assault rifles into businesses to make a point. That action prompted the Chipotle restaurant chain to discourage firearms on their premises.

Whataburger's decision is expected to pave the way for other restaurants to enact similar policies that will further limit where gun owners can openly carrying their beloved firearms.

But what about other private businesses? Imagine people strolling through Sears carrying semi-automatic rifles?

So If you look back in history everyone carried a weapon.I carry a 9mm any time me and my boys leave the house. I know I am able to protect them from almost anything or die trying. If we are all armed Then good citizens can step in and take action. If a robber walks into a store and 5 out of 30 people are armed do you think he is more or less likely to reconsider robbing the store? I fully support Americans carrying the gun of their choice where ever they go. My son attends a school where the teachers are armed and I wouldn't have it any other way. I know my child will not end up a sandy hook victim. I think you should reevaluate what you are say. If you dissarm the citizen you give all the power to the criminals to do as they please.

Thanks for stopping by and sharing your opinion Ashalette. It's always nice to get feedback. I respect your position and wouldn't even try to talk you out of it.

I honestly feel that carrying weapons openingly is a pandora's box of problems.