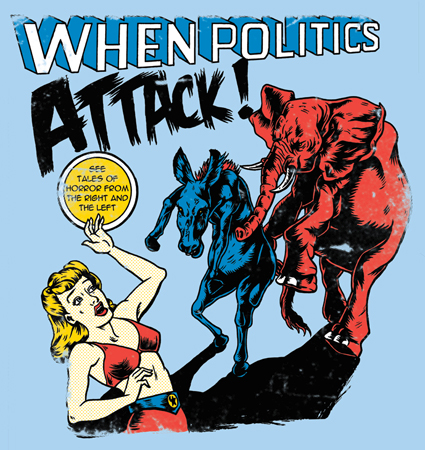 Presidential wannabe, Canadian-born Ted Cruz, fired the first shot of his propaganda campaign before an appreciative audience of NRA members.

Likely GOP presidential candidates used the National Rifle Association's annual conference on Friday to sharpen their attacks on Hillary Clinton in anticipation of the start of her presidential campaign.

Cruz told Hillary Clinton (who announced her candidacy today) not to mess with the NRA and the 2nd Amendment. Reminiscent of Charles Heston’s famous passionate speech, Cruz dared Hillary “To try and come take away his guns.”

Somewhere in the alter universe of Cruz’s world, he saw himself threatened by a woman attacking him and trying to wrestle away his gun. Think about that picture for a moment.

Good theater and meat for the gun lobby however. Cruz (like every GOP candidate that night) is counting on the NRA for support. He could have been even more effective if he would have had a rifle (like Heston’s flintlock) and waved it over his head. NRA’ers love a good show.

The "Ready for Hillary" grassroots movement has been encouraging Clinton to run for president in recent years.

With Cruz leading the way by attacking Clinton first, the circus is officially on! The war of words has started. The enemies are engaged. It’s time to turn on your bull-sh**t meters and start filtering facts from lies.

GOP Candidates Sharpen Attacks on Clinton Ahead of 2016 Announcement

Since I cast my first vote for a president in 1968, I’ve watched the whole election system transform from a time when real issues were discussed in a respectful manner, to the circus it has become today.

Needless to say, whoever wins will be beholden to the Super PACs, and other wealthy contributors. They’ll have to follow a party line – be it Republican, or Democrat. I don’t think there’s much hope for most Americans truly getting representation from a new President, or Congress.