Why Prisons Are Called Universities of Crime 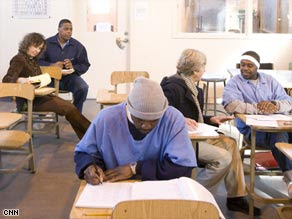 In American prisons, and others throughout the world, terrorists are being breed like cockroaches.

"Prisons have been called universities of crime for a long time," said Mark Hamm, professor of criminology at Indiana State University and author of "The Spectacular Few: Prisoner Radicalization and the Evolving Terrorist Threat."

"That idea is simply being applied to terrorism so prisons might become universities of radicalization, and in some cases that has proven to be true."

The risk that jails could breed a fresh generation of radicals should sound alarm bells in the U.S., which has the world's largest prison population and the second-largest per capita. "We are the world's jailors," Hamm said.

There have been U .S. cases, including the 2005 discovery of Jam'iyyat Ul-Islam Is-Saheeh, an Islamist group that robbed southern California gas stations with the aim of funding terrorist operations.

At southeast London's Belmarsh prison — which once housed hook-handed hate preacher Abu Hamza, who was jailed for life in the U.S.earlier this month — warders told an official House of Commons inquiry into radicalization [PDF link] that extremist views were "widely disseminated" among inmates but they struggled to monitor how far such ideas were adopted.

"But that network needs to be in place. In the case of the Madrid train bombing you can trace the influence back to one prison and one cell block and the social network between inmates."

Complicating the picture, some new inmates join religiously-affiliated networks for their own protection as they navigate the fearsome prison gang scene, coloring conventional faiths with an undercurrent of violence.

"The whole thing is built on a prison gang model … not only for Islamic groups, but also white supremacists," Hamm said. "In the U.S. we have the phenomenon of prison Islam, which is nothing to do with Islam in the real world.

It's a jailhouse Islam that mixes certain tenets of Salafist thought with American Islam in the Malcolm X tradition then it blends those with symbolism and the internal cohesion of street gangs into a very complex mix."

"You can cut the head off the snake, move the leader into another institution or you can just try to micro-manage the problem," Hamm said.

"In a prison with 3,000 convicts you've first of all got to identify the problem: How many are at risk? Who's doing it? What is the method?"

The history of Islamist radicalization in prisons stretches back more than half a century — jihadist icon Sayyid Qutb wrote extremist texts while jailed in Egypt in the 1950s [PDF link] — but the response stepped up only after Sept. 11, 2001 attacks put the issue onto the global agenda. (source)

It’s pretty clear to me that if we don’t shut down the terrorists cells in prisons, civilization – as we know it now – will cease to function.