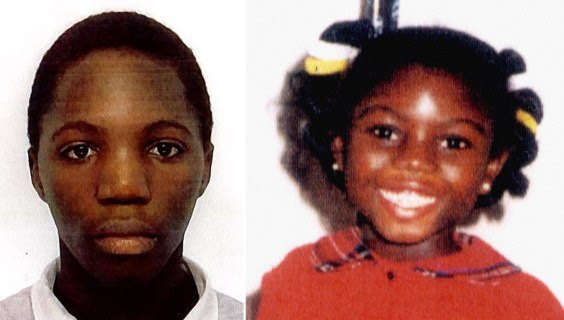 Kristy Bamu, left, was killed after what a prosecutor described as "a staggering act of depravity and cruelty." Victoria Climbie, right, was murdered in one of Britain's worst cases of child abuse.

My travels in search of stories to share brings me to London today. I have one that’s about bizarre religious practices that will shock you. It did me. I had no idea.

This is modern London, mind you.

“London's Metropolitan Police announced this week that reports of abuse where the child is accused of being a witch or possessed by an evil spirit are on the rise. Fourteen years after the force recorded its first allegation of such an incident, there have been at least 27 cases during in 2014 alone.” (source)

What’s happening, according to authorities, is there’s a version of fundamentalist Christianity practiced in London that believes in witches – and worse – tortures their own children to get rid of alleged demons.

Most of the cases involve pastors or religious leaders in African communities who have incorporated elements of witchcraft or spirit possession into their version of fundamentalist Christianity.

These "rogue pastors" often tell families that a period of bad luck or even an illness has been caused by a child being possessed.

What motivates these religious leaders?

Power, money, greed and control. Many people who go to these churches are vulnerable and are looking for something to hold onto.

For example: There was a four-year-old old boy who was brought to the church attended by his mother because he was playing too rough with his brother. The pastor told her (the behavior) was the result of him being possessed and that he was a witch.

Shades of the Inquisition…

The boy endured a four-day "deliverance," in which he was starved, forced to drink hot palm oil and prevented from using the bathroom.

In the past decade and a half, London's most high-profile cases have been linked to Christian groups with roots in Western and Sub-Saharan Africa. But cases involving other faiths, such as Islam and Hinduism, have emerged more recently as authorities have delved deeper.

“Authorities say part of the problem with trying to combat abuse linked to witchcraft has been that officers have been wary of being branded racist in the past.” (Condensed version – full story here)

I wonder when saving these children will become more of a priority, transcending arguments over race? Hopefully, very soon.