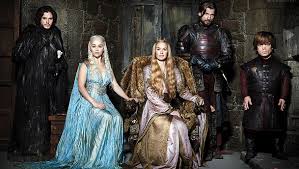 Here’s some interesting news for fans (include me) of the popular HBO series “Game of Thrones.”

Because the fantasy series has been such a hit, bringing in millions of viewers, some creative folks are getting together to capitalize on the fact that the mythical land of Westeros is filmed in Northern Ireland.

Tourism officials in Northern Ireland say they are looking at ways to piggyback off the success of the HBO fantasy TV series.

Much of the "Game of Thrones" is filmed in Northern Ireland, which provides a backdrop of castles and rugged coastlines. Northern Ireland's Enterprise Minister Arlene Foster announced the tourism strategy recently but gave no details.

Foster said she wanted to attract more than 2 million visitors a year to Northern Ireland by 2016, compared to some 1.8 million people in 2013. I’m looking forward to seeing what they come up with. I can see castle tours replete with character’s in period costumes. How about you?