A Life of No Respect Lives On! Visit the New Rodney Dangerfield Website

If he were alive today, Rodney Dangerfield would be grinning from ear-to-ear!

His widow, Joan Dangerfield, unveiled an online tribute to her late husband on Nov. 22, which would have been his 92nd birthday if he were still with us.

If you’re a big fan of Dangerfield like myself, this site is the Mother-of-All repositories for Rodney Dangerfield memorabilia. Check out his old movies, stand-up routines, and the story of his remarkable comedic career.

His signature comedy routine about never getting respect was always greeted with howls of laughter from audiences worldwide. The fact is, he got a lot of respect in his lifetime and was honored many times for his work. 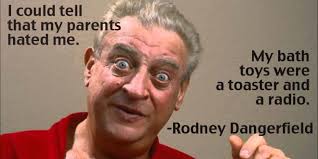 Born Jacob Rodney Cohen in 1921 to Hungarian Jews from Long Island, he grew up largely without his father, a vaudeville performer who abandoned the family when Rodney was very young.

How did he come up with that signature respect routine?

Inspiration struck while eavesdropping on the mobster-types who hung around comedy clubs. "He overheard them saying, 'Hey, respect her, she's with me.' That kind of language. And he thought, 'That's it!' "

Years later, Jack Benny, Dangerfield's hero, called to offer his admiration: "He said, 'You have the best image of all time. Because everybody feels that at one point on another they're not getting respect.' "

Thanks for the laughs Rodney.